From the archive
Francesca Molteni 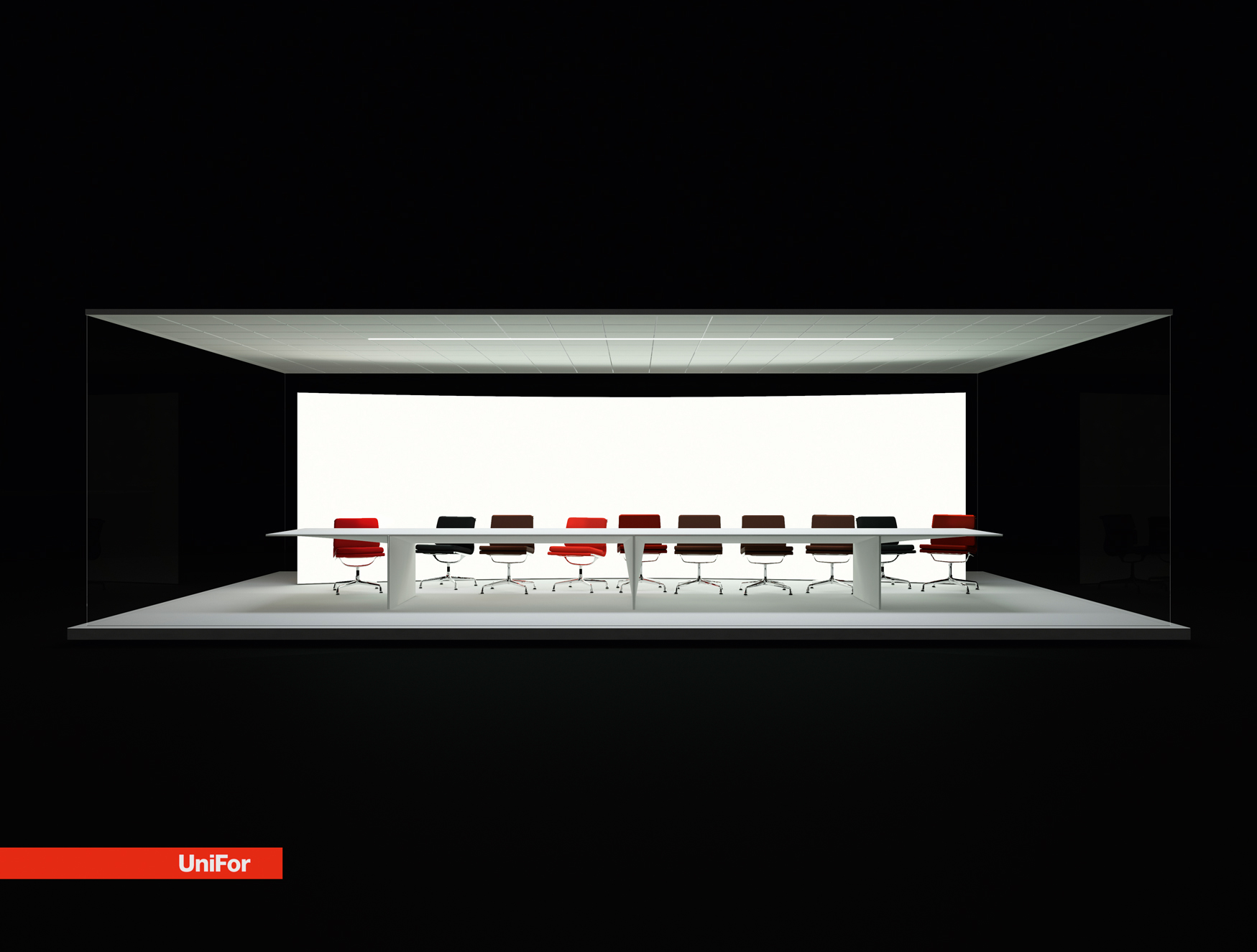 It was 1968, the year of great and definitive events that left their mark on consciences, cultures, populations, lifestyles, and consumer habits. That year, the name of which became the symbol of an era, was many things, including the ethics and aesthetics of 2001: A Space Odyssey, a cult film on the identity of man and the role of knowledge, information access, and technology. In the midst of that cultural ferment, UniFor was ready and prepared to welcome the internationality and centrality of design as the foundation of development, in order to transform the visions of architects into public and private spaces, then objects, and finally, icons. The power of coincidences. From our workshop/observatory, we have accompanied the evolution of work throughout the world. We have dialogued with large corporations, with the contractors who built the contemporary landscape – the metropolises and the manufacturing complexes that have marked the economic history of the second half of the twentieth century – and with the architects, those creators of the shapes and spaces that define functions and transmit meanings.

We have experienced, in these fifty years, the time of organized work and the time of destructured work that expands into the personal sphere. We have witnessed the time of rigorous spatial layouts and the time in which space defines new worlds for other, more articulated, affiliations. Museums, theaters, libraries, and temporary installations have represented, with their demanding levels of technical, mechanical, and symbolic innovation, challenging contexts in which to invest the district’s capital of intellectual and artisanal skills.
We have embraced the future within the walls designed for us by Angelo Mangiarotti, and beyond those walls we have shared it with the intelligent supply chain that has permitted UniFor to develop not so much products but solutions. This supply chain is emblematic of “Made in Italy,” an approach based on the formal and informal know-how that has made the Brianza district a paradigm of historical and contemporary intellectual capital.
UniFor with its networks, has been a world open to the world: for some it was a company, and for others, a factory, an incubator of endless experiments that have translated the momentum of ideas and the intelligence of function into efficient, beautiful, ergonomic, and distinctive forms. Everything took place in a subtle and smart chemistry of trust, vision and organization, starting from a cultured, meticulous, and passionate business community that is part of an industrial group made up of expertise, experience and reputation.

Before the projects and before production, the challenge has consisted in understanding how to decipher the spirit of the times in order to interpret needs and desires, while at the same time practicing virtuous environmental, economic, and social sustainability policies. We can never be thankful enough for the commitment and dedication of all those who have assured exceptional engineering and production, rigorous and incisive communication, quality of service, and managerial solidity. These fifty years represent the value of a perspective to be lived and a story to be told.
Thank you. Art, culture and industry come together at Palazzo di Brera for UniFor’s 50th anniversary. To look back at five fundamental decades in the history of Italian design, the Molteni Group has chosen a space in the seventeenth-century Palazzo in via Brera in Milan, the headquarters of key institutions for the city: the Accademia di Belle Arti, Pinacoteca di Brera and Biblioteca Braidense. The display is curated by Fulvio Irace, and features a multimedia installation by Ron Gilad. Accompanying the exhibition is the book Una vocazione per l’architettura, published by Skira with graphic design by Pierluigi Cerri. This draws on UniFor’s hitherto unpublished archive to describe its specific vision: the design of an interior landscape that turns the ideas and requirements of contemporary clients and architects into reality.

UniFor grew out of a family story. It was origianlly an idea of a community, but it was also testament to the human capital of technical experts, architects, designers, graphic designers, photographers, and exceptionally far-sighted, specialized, skilled, competent and creative craftspeople. All have enabled the company to establish itself as a synonym for elegance, reliability and innovation in the definition of the Bürolandschaft in the second machine age. The story began in the 1970s in Turate, where Angelo Mangiarotti designed the first nucleus of the headquarters and the production units, which gradually expanded with the growing fortunes of the company. It was a model factory, where production was kept in-house, allowing for an obsessive attention to quality. In its classic simplicity, the headquarters became a living manifesto for UniFor’s corporate spirit. The following decades were to be decisive: major overseas projects were accompanied by collaborations with great names in architecture. The book describes UniFor’s key features, highlighting the absolute singularity of its working method.

It reconstructs the company’s identity by examining certain exemplary moments, from UniFor’s collaborations with leading designers and architects such as Michele De Lucchi, Foster + Partners, Jean Nouvel, Renzo Piano, Aldo Rossi, and  lvaro Siza, to its communication strategy, with Pierluigi Cerri’s graphics acting as a tool for unifying the company’s message through its coordination of graphic identity and display systems. Cerri’s showrooms and furniture fair stands exemplify, in the three-dimensionality of the spaces, the concepts of order, measure, functional elegance and innovation. To convey UniFor’s corporate values, and its legacy in the history of design, Ron Gilad has built his tribute to UniFor’s 50th anniversary around the space curated by Fulvio Irace, and in relation to the venue that is hosting the multimedia installation, with its cultural and social centrality to the life of Milan. The accompanying book has been incorporated into the installation in the form of a gigantic sculpture in the centre of the Cortile d’Onore, opposite a statue of Napoleon. The sculpture is a bronze cast based on a model by Antonio Canova, with a video animation that reproduces the book’s pages, which are turned by Josephine Bonaparte. The Last Supper, an installation in the Sala Napoleonica, presents a number of UniFor products, including the DCA system by David Chipperfield and the Elements 03 table by Foster + Partners. They are animated by a live performance by drama students from the Accademia di Brera inspired by Leonardo’s celebrated fresco. Touchdown, the third project forming the tribute, presents the new product designed by Studio Klass in the Sala della Passione. Here, a projection of a cartoon shows its potential, and is accompanied by a sound environment created by the students of the Accademia di Brera’s masters degree in sound design.

“I find many similarities in relating the technical skills, engineering capacity and the refined craftsmanship of an industrial company such as UniFor with the intellectual and creative potential of an artist or a performer,” says Ron Gilad “Passion is the key”.

Observing things and remembering. This dual concept holds the key to understanding the ties between Aldo Rossi and design.

The story of M&C, the magazine produced by the Molteni Group, is a long one. When it was first distributed at the end of the 1980s, it was called simply Il Giornalone [“Large Newspaper”]

This is the story of an engaging, almost intimate relationship. The authors of the short movie, Era Ora and Ivana Gloria, choose the language of animation and turn objects into characters